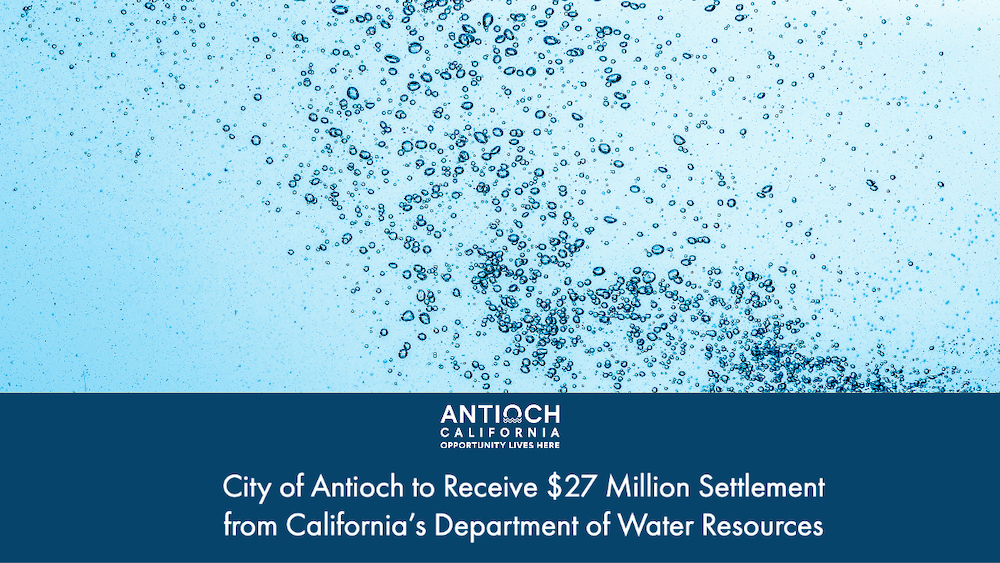 Antioch, Calif., (April 9, 2020) – On April 14, the Antioch City Council will consider the adoption of a resolution approving a historic settlement agreement between the City and California’s Department of Water Resources (DWR).

The agreement pays Antioch $27 million, which guarantees that they will be able to utilize its 150-year old water rights and remain in the Delta for the long-term. The $27 million, in addition to $43 million in State grants and loans, completes the financing for the $70m Brackish Water Desalination Plant.

In 1968, the City of Antioch and DWR entered into a settlement agreement in which DWR pays Antioch one-third the cost of supplemental water needed when the Delta became too salty as a result of DWR’s upstream diversions.

“This agreement is a major milestone for Antioch because it will be invested into the construction of the City’s Brackish Water Desalination Project,” said Ron Bernal, City Manager, City of Antioch. “Adoption of this resolution will improve water quality for our residents, improve water reliability for our residents, and stabilize future water cost increases for our residents.” Bernal emphasized, “The impacts of climate change will be significantly mitigated by the project for the foreseeable future. Antioch is committed to using our water rights and staying in the Delta.”

According to DWR, they believe the Brackish Water Desalination Project is designed in an environmentally appropriate manner, promotes regional self-reliance and recognizes the value of the project that will serve Antioch’s citizens in a manner consistent with the State of California’s goals pertaining to water supply resiliency, climate change, and sea-level rise.

About the City of Antioch: Antioch is located on the banks of the San Joaquin River in Northern California. Just off of Highway 4, in Contra Costa County.

With a population of over 100,000 people, Antioch has become the heart of Eastern Contra Costa County, offering a variety of employment, shopping and vast recreational activities.

The pace of development in Antioch has spurred activity for financial and insurance institutions, contractors, and other types of service-oriented businesses. Increased development has created increased employment in schools, hospitals, and other local service sectors. Antioch poised to capitalize on its location, skilled workforce, and fiscal strength.

January Coffee with a Cop

#BlackHistoryMonth is a time to honor and celebrat

Was your business impacted by the COVID-19 pandemi

When you have a calling, you can lift an entire co

Happy Lunar New Year! May the year of the rabbit b

Today we honor Dr. Martin Luther King Jr. and his

Come join us for our first community forum of the

The City of Antioch Council of Teens is hosting a